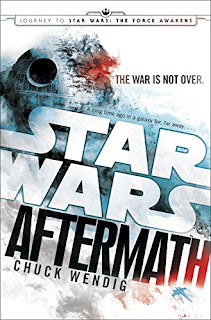 
Review“[Chuck] Wendig neatly captures the current states of the Empire and Rebel Alliance and does so through flawed, real, and nuanced characters. His writing gets you up close and personal. . . . Wendig does wonders with dialogue and voice and carving out space for everyone to breathe. Aftermath is a strong foot forward into unexplored territory and puts down just enough foundation that you can start picturing the Resistance and First Order of The Force Awakens taking shape.”—Nerdist “Wendig brings a fresh new voice to the Star Wars saga. . . . His snapshots of galactic life bring a sense of scale unlike any Star Wars novel has seen. If this is any indication of the direction this franchise’s storytelling is headed, sign me up.”—Alternative Nation “[Aftermath] brings vivid characters and a strong writing style. . . . There are intriguing hints at where Star Wars stories could go next. The Star Wars universe is fresh and new again, and just as rich and mysterious as it always was.”—Den of Geek “If the opening chapter of the Wendig’s Aftermath trilogy is any indication, the ‘Journey to Star Wars: The Force Awakens’ will be every bit as exciting as the movie.”—New York Daily News “A wonderful Star Wars adventure by a gifted author.”—SF Book Reviews